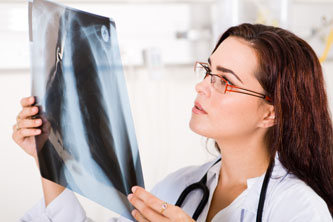 Asbestos Containing Materials (ACMs) only become a risk to health when damage occurs or whilst being subjected to disturbance such as being cut, drilled or sanded which will release asbestos fibres to become airborne.

Whilst in a good and sealed condition and in a location unlikely to be disturbed, asbestos materials provide very little, if indeed any risk to health.

The danger comes from inhaling air containing asbestos fibres. If the fibres are small enough they can penetrate deeply into the lungs and lead to asbestosis, mesothelioma and lung cancer.

Asbestos fibres, small enough to evade the lungs initial defence mechanism, penetrate deeply into the alveoli (air sacks). The lungs microbiological defence system (macrophage) continually attack the fibres, but because asbestos cannot be broken down (except under very high temperature) the fibres remain in the lung causing scarring and inflammation along with congestion caused by the build of macrophage debris. This slowly reduces the lungs ability to transfer oxygen and carbon dioxide to and from the blood, breathing becomes more and more laboured resulting usually in a painful death.

Mesothelioma is a cancer of the pleura (the lining of the chest cavity and lung), it is a rapidly spreading cancer that can often spread to other organs. It, along with Asbestosis, is usually caused by long term exposure to airborne asbestos fibres. The onset of the symptoms of Asbestosis and Mesothelioma may appear as early as ten to fifteen years after exposure, but may take as long as sixty years. Unless caught very early, usually there is no cure for either Asbestosis or Mesothelioma, especially where the ailment is in an advanced state, the average survival time is between four and eight months from diagnosis.

Cookies are used for ads personalisation. We use cookies on our website to give you the most relevant experience by remembering your preferences and repeat visits. By clicking “Accept All”, you consent to the use of ALL the cookies. However, you may visit "Preferences" to control consent.
Manage options Manage services Manage vendors Read more about these purposes
Preferences
{title} {title} {title}